With Rachel Roubein and Brianna Ehley Editor’s Note: POLITICO Pulse is a free version of POLITICO Pro Health Care’s morning newsletter, which is delivered to our subscribers each morning at 6 a.m. The POLITICO Pro platform combines the news you need with tools you can use to take action on […]

With Rachel Roubein and Brianna Ehley

Editor’s Note: POLITICO Pulse is a free version of POLITICO Pro Health Care’s morning newsletter, which is delivered to our subscribers each morning at 6 a.m. The POLITICO Pro platform combines the news you need with tools you can use to take action on the day’s biggest stories. Act on the news with POLITICO Pro.

— The White House may nix millions of dollars in public health funding that goes to so-called anarchist cities, according to a document obtained by POLITICO.

— There were nearly 300,000 more U.S. deaths as the coronavirus crisis worsened, compared with the same timeframe last year, according to a new CDC report.

— Two former advisers to HHS Secretary Alex Azar are starting a new consulting firm, with a title that winks at the health department.

WELCOME TO WEDNESDAY PULSE — Where we like this advice from the “Boomer Grandpa,” a regular columnist for Minnesota’s Post-Bulletin: it’s time to make a plan to get through this coronavirus winter.

The Boomer Grandpa also has us pondering our own column name, if “PULSE” wasn’t allowed. (“The Middle-Aged Millennial”?) Send your own nom de plume and other tips to [email protected] or [email protected].

AN INVITE FOR PROS: We’re inviting a handful of our Pro subscribers to join our Oct. 29 private Zoom discussion on the policies and public health solutions needed to solve the racial inequalities in the U.S. health care system. This will be held immediately after our virtual town hall and include our moderators, some of the speakers and a small group of engaged readers like yourself (ex. medical professionals, advocates, patients and others). Let us know if you’re interested in participating and we might be in touch.

A message from Walmart:

HEALTHY COMMUNITIES – Walmart is helping provide accessible healthcare with no appointments needed and affordable services offered in communities across the country. The retailer is offering free flu shots for their 1.5M associates and is making this service available for customers at more than 4,700 locations. Learn more.

The effort just weeks ahead of the election targets New York City, Portland, Ore., Seattle and Washington, D.C. It’s part of a government-wide review ordered last month, when Trump called on agencies to cut off funding to jurisdictions that “disempower” police departments and promote “lawlessness.”

— HHS is casting a wide net. The department compiled a list — with input from at least a dozen agencies — that includes 185 programs eligible for cuts, touching on everything from Trump’s own initiative to end HIV transmission within a decade to the opioid crisis and research into lung diseases.

— The White House’s budget office gets the final say. And it’s not immediately clear what criteria it will use to evaluate the federal funds — or how the cuts will be made. A senior administration official did not rule out the possibility that cities could lose their existing funding.

CDC: NEARLY 300,000 ADDITIONAL U.S. DEATHS AMID PANDEMIC — The nation saw an additional 299,000 deaths as the coronavirus crisis spiraled, compared with the same timeframe last year, according to a new CDC report.

And of the excess deaths that occurred between Jan. 26 and Oct. 3, roughly 66 percent were people who succumbed to the virus. Excess deaths reached their highest peaks in early April and early August, Rachel writes.

The study noted that adults between 25 and 44 years old accounted for the biggest increase in excess deaths, though older populations registered more deaths overall.

Broken down by racial and ethnic groups, excess deaths increased the most — about 53 percent — among Hispanic and Latino people.

FIRST IN PULSE: JMOB, JOHN BROOKS ANNOUNCE NEW FIRM, ‘SOUTH CAPITOL’ — The two former advisers to Azar have joined forces on a new firm that they say will focus on research, analysis and strategy consulting for health care organizations.

“The new company is named after the most direct route between the HHS headquarters building and Nationals Park, where O’Brien and Brooks would frequently discuss their work at the Department and with stakeholders to build better solutions for patients and taxpayers,” according to the release, shared first with PULSE.

STATES PLOT THEIR OWN VACCINE REVIEWS — Several states are vowing to conduct their own safety reviews of a Covid-19 vaccine, amid lingering fears the Trump administration could rush a shot to market, POLITICO’s Zachary Brennan reports.

At least four states and Washington, D.C., are creating independent review panels, in hopes of boosting public confidence that an eventual vaccine will be safe and effective. Recent polling shows only a little more than half of Americans are willing to be vaccinated as soon as possible.

— Most of the states are run by Democratic governors, including New York, California and Michigan. But West Virginia is also planning an advisory group of 20 to 25 pharmacists and physicians to review vaccine data.

Still, it’s unclear whether states could block the distribution of a vaccine if they have concerns. And Republicans and some public health experts have criticized the planned panels as unnecessary and warned it could backfire — undermining trust in the FDA and adding to public vaccine hesitancy.

In an open letter, the group argued that publicizing trial design documents could help alleviate public anxiety over the government’s decision to authorize a vaccine.

Republican governors in states like Ohio, Tennessee and Mississippi are racing to control the virus’ spread — creating a stark contrast between Trump’s dismissive rhetoric and the worsening situation on the ground.

“These numbers will not change unless we change,” Ohio Gov. Mike DeWine said Tuesday, urging attendees of an upcoming rally held by Vice President Mike Pence to wear masks.

In Mississippi, Gov. Tate Reeves issued a mask mandate and is limiting gathering size. And across several states including Utah and Indiana, hospitals are nearing capacity or facing staff shortages.

— Those moves may be resonating with the public. A Kaiser Family Foundation survey this week found that about two-thirds of adults say they’re worried they or a family member will contract the coronavirus — a 13 percentage-point increase compared with early April.

The state’s expanded Medicaid program began at the beginning of the month. But in order to get enhanced benefits starting April 1, those who qualify for Medicaid under Obamacare’s expansion must have an annual health visit, complete a health risk assessment and not miss more than three scheduled appointments within a half-year.

A work requirement will take effect in April 2022, though similar policies have been struck down by the courts and rescinded in nearly every state.

The Democrats’ demands follow Dan’s report that HHS General Counsel Robert Charrow warned in an internal memo that the plan could violate election law. Health officials had been trying to finalize the hasty plan before Election Day.

The media reports “appear to confirm our concerns that the Trump Administration is relying on dubious legal authority to justify a blatant political gambit by the President that would be paid for using taxpayer dollars,” Reps. Frank Pallone and Richard Neal and Sen. Ron Wyden wrote to Azar. The three Democrats are demanding Charrow’s memo and other documents by Monday, including a draft letter announcing the plan that health officials had hoped to send to 39 million Medicare beneficiaries this month.

— The effort is the latest in Democrats’ full-court press to investigate Trump’s stewardship of the health department, with the pace picking up as the election draws near. Most of those investigations have focused on the administration’s handling of coronavirus, and independent watchdogs also are opening their own probes; the Government Accountability Office said it will soon begin an audit into how Trump appointees interfered with messaging at CDC and FDA.

“Where there’s smoke, there’s fire,” said Rep. Raja Krishnamoorthi, who chairs the Oversight Committee’s economic and consumer policy subcommittee and has probed how Covid-related guidance has gotten bogged down with the White House’s Office of Information and Regulatory Affairs. “My Subcommittee will continue our investigation into OIRA’s role in suppressing non-partisan, scientific messaging from the CDC and FDA.”

SUSAN B. ANTHONY OFFERS NEW DATA ON PREGNANCY CENTERS — The anti-abortion group’s research arm, the Charlotte Lozier Institute, is out with a new report on the growth of the centers, which focus on serving women with unplanned pregnancies.

Planned Parenthood and other abortion-rights groups have charged that the pregnancy centers wrongly try to convince women with unplanned pregnancies to avoid abortion.

A message from Walmart:

Walmart is helping make communities across the country healthier with affordable, accessible care. The retailer is expanding health services including dental care, primary care and more – with no appointments needed and at affordable rates. As we enter flu season, Walmart is providing free flu shots to their 1.5M associates and offering the service to customers at more than 4,700 locations nationwide. As a trusted healthcare destination, Walmart knows there is a clear need for convenient, quality and affordable healthcare. Learn more.

The New York Times looks at how FDA and commissioner Stephen Hahn have increasingly clashed with the administration as the pandemic has spiraled.

Meet the 85-year-old nun who led the creation of the Mercy Health System in the latest chapter of Sarah Jane Tribble’s KHN podcast, “No Mercy.”

Speaking of podcasts, Dan joined his old colleagues at Advisory Board to discuss the health care issues on the ballot this year.

The three key places where Covid-19 continues to spread: “people’s workplaces, school, and restaurants and bars,” Ngozi Ezike, the director of the Illinois Department of Public Health, said on Tuesday. NBC Chicago has more.

Wed Oct 21 , 2020
The statewide total of 184,872 COVID-19 cases is now with 8,533 deaths since the virus hit. PENNSYLVANIA, USA — The Pennsylvania Department of Health provides daily press releases updating the public on the state of the coronavirus across the Commonwealth. Those press releases include updates case numbers and totals. You […] 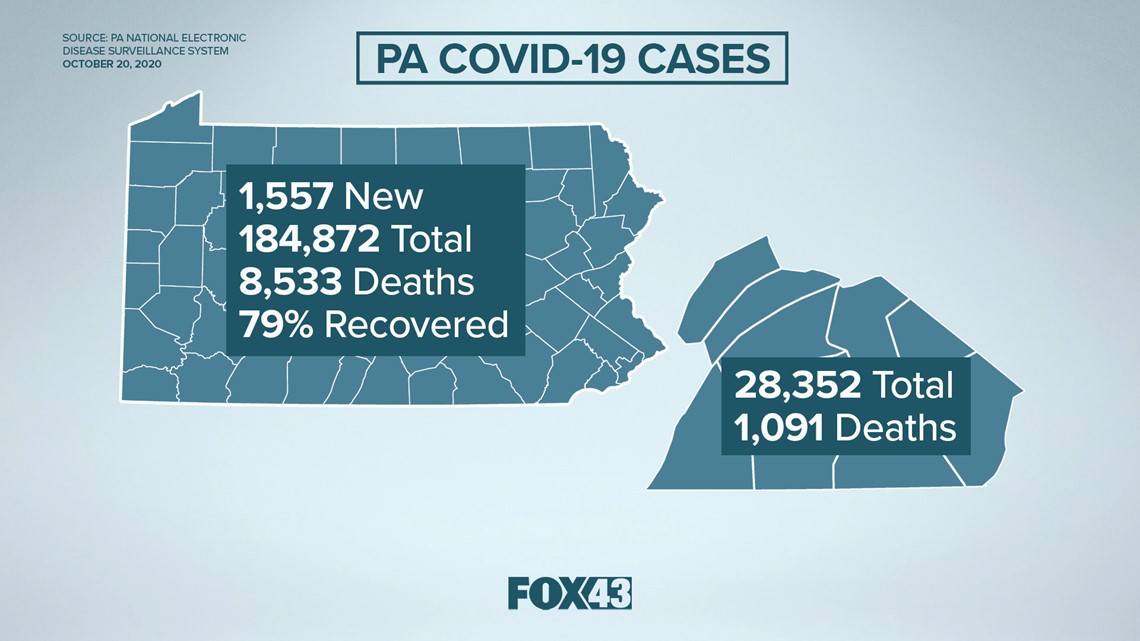